Margaret McPherson was born in 1834, three months before the Emancipation Act came into effect, and she never visited the West Indies. An only child, she was the daughter of the local doctor in Aberlour in Banffshire, north-east Scotland. Her mother was said to have married beneath her, although herself only the daughter of an impoverished minister.[1] At the age of twenty, Margaret’s life changed forever when she inherited a vast Jamaican fortune from her childless, self-made uncle Alexander Grant. Alexander left £300,000 in personalty as well as property in London, Scotland and Jamaica.[2] Margaret became hugely wealthy, dependent upon no-one and without social equal, which allowed her to live an unorthodox and ultimately tragic life. Margaret provides an unusual example of how the legacies of slave-derived wealth in Britain continued to be felt long after slavery had been abolished.

After gaining her inheritance, Margaret lived in the mansion built by her uncle on the banks of the Spey river about a mile from the village of Aberlour. Her main interests were salmon fishing and the Episcopal Church.[3] She occasionally visited London where, in 1864, she met Charlotte Temple, the 22 year old daughter of a Wiltshire landowner. They formed a close friendship and in the autumn of that year Charlotte came to visit Margaret in Aberlour, staying until the following spring. A few weeks after Charlotte returned to her parents’ house in Wiltshire, Margaret was back in London again, when she sent a telegraph to Charlotte asking for a meeting. Margaret visited Charlotte’s parents and begged them to let Charlotte live with her permanently, promising that because of her love for Charlotte, she would make her the heir to her Jamaican fortune. After much discussion, Charlotte’s parents agreed. Margaret had previously bequeathed her property to the Episcopal Church, but in 1865 on another visit to London, she changed her will, leaving the bulk of her fortune to an elderly aunt and thereafter to Charlotte: “She goes to the [lawyer’s] office and brings out the pen to Miss Temple, who was waiting in the carriage, saying to her, ‘Do you know what I have been doing? I have been making you my heir, and here is the pen I did it with; keep it!”[4] 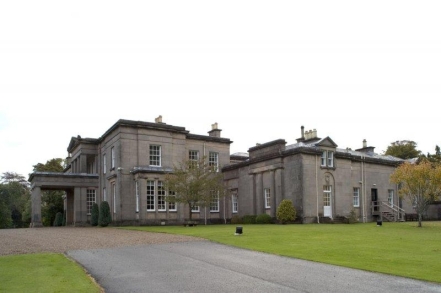 Throughout the late 1860s, Margaret and Charlotte’s life together in Aberlour House was blighted by Margaret’s increasing alcoholism. “After getting her fortune, Miss Grant seemed to have given reins to herself. She got into a habit of tippling to a large extent, drinking not merely wine, but beer and brandy – a bottle and a half of brandy a-day sometimes. Miss Temple used arguments to wean her from that, and appealed to her self-respect, but without avail. She hid her failings when she could, and when she could not did her best to do so.”[5] Several newspaper reports after her death described periods of abstinence and times of excess. Her father appears to have had a calming effect, although he could not dictate the terms of her life; he came to live with them in Aberlour House in 1870 and she gave up alcohol for a while, only to relapse after his death in April 1871.[6]

Despite their difficulties, Margaret and Charlotte loved and cared for each other – perhaps, according to disapproving comments in newspapers after Margaret’s death, too much so. “Something like a marriage had taken place between them. Each pledged herself to celibacy; Miss Grant ‘married’ Miss Temple, placing on the latter’s marriage-finger a suitable ring, and thenceforth designating her ‘Charley’; Miss Temple not only reciprocated the extraordinary affection, but likewise manifested similar extraordinary proofs of it – she termed herself ‘Wifie’ in her letters to Miss Grant, she addressed the latter as ‘Jamie’ and in short, a lot of remarkable tomfoolery went on between the two.”[7] Public records of their lives at this time consist of reports of salmon fishing and grouse shooting expeditions and of entering stock into local agricultural shows.[8]

Margaret made large donations to a variety of good causes, in particular to the church: “Her almost boundless wealth enabled her to promote and carry out schemes of charity… Every popular movement had her sympathy and support”.[9] She continued to oversee the management of her Jamaican estates, dictating her correspondence to Charlotte when she communicated with her Jamaican factors. Despite being described as “very masculine in appearance and manly in dress”, Margaret’s wealth and charitable giving afforded considerable social leeway as the “’strong-minded’ but none the less highly respected proprietrix of that fine Speyside property”.[10]

In August 1875, the London Standard reported that, in the space of a few hours, a Captain Yeatman “bagged 26 brace of grouse, 2 hares and 2 plovers” on land belonging to Miss MacPherson Grant of Aberlour.[11] It’s not clear when Harry Farr Yeatman first became known in Aberlour, but by December 1875, Charlotte had become engaged to marry him. Margaret’s reaction to Charlotte’s betrothal veered from one extreme to another depending on her alcohol intake. At times she welcomed the alliance, offering to host their marriage in Aberlour House, and at other times she was distraught about the idea of Charlotte leaving her and scathing about the prospect of Charlotte’s potential “brats of children”.[12]

Shortly after the announcement of Charlotte’s engagement, a fire broke out in Aberlour House, the origins of which are unclear. After the fire, Margaret suffered what would probably in modern terms be described as a psychotic episode. Despite being shepherded to safety while the fire raged, Margaret became convinced that she had rescued a servant girl herself and carried her to safety. Much more worryingly, “She got so terrified and frightened she seemed to think there was a hole in her head, and asked people to look for it. She got her hair clipped sometimes twice a-day. She beseeched her attendants to look for the hole.” Living in a mire of unhappiness and drinking to excess, Margaret suffered from paralysis in her legs and died in April 1877, just two weeks before her 43rd birthday.[13]

Margaret revoked her will in November 1876 and died intestate. Her fortune was inherited by a cousin on her father’s side whom she had probably never met. Charlotte contested the settlement, claiming that Margaret was of frail mind at the time and under the undue influence of her Jamaican factor. A compromise was agreed, whereby Charlotte was allocated £10,000, most of which she exchanged for a watch she had previously given to Margaret, and Margaret’s diamond brooch.[14] After her death, Margaret’s estate was valued for probate at £195,500 including moveable estate on Bryan Castle, Brampton Bryan and Low Layton estates in Jamaica.[15]

There are three lasting legacies to Margaret in the north-east of Scotland. Firstly, she donated £3000 to pay for the construction of St Margaret’s Episcopal Church, still at the centre of Episcopal life in Aberlour. She also donated the organ to Inverness Cathedral, which has only lately been replaced. Finally, and most significantly, she was the first benefactress of the Aberlour Orphanage, still in existence today as the Aberlour Childcare Trust, which provides help to over 6,000 of Scotland’s most vulnerable children, young people and their families each year.[16] Although the websites of each institution describe Margaret’s role, none say where her wealth came from; the brutality of sun-drenched life on Jamaican plantations was a far cry from Margaret’s existence in Scotland.

[2] Alexander Grant in the LBS database: http://www.ucl.ac.uk/lbs/person/view/46343. Will of Alexander Grant of Arlington Street, Middlesex, PROB 11/2193/143. Alexander Grant’s fortune included £300,000 of moveable property as well as property in London and Scotland and plantations in Jamaica.

[4] Petition of Charlotte Yeatman for the sequestration of the estates of Miss Margaret MacPherson Grant, describing their lives together and reported in several newspapers including Aberdeen Weekly Journal 14/07/1877 Issue 6989 p. 8, Dundee Courier & Argus and Northern Warder, 17/07/1877, Issue 7483 p. 3. Quote from Lachlan Shaw, History of the province of Moray. Comprising the counties of Elgin and Nairn, the greater part of the county of Inverness and a portion of the county of Banff (Glasgow, Hamilton, Adams & Co., 1882) p. 176.

[7] Lachlan Shaw, History of the province of Moray, p. 178. Letters between Margaret and Charlotte are similarly mentioned in Aberdeen Weekly Journal, 27/12/1877, Issue 7131 p. 3 and reports of letters which could be made public in court appear in many other newspapers, for example, Sheffield & Rotherham Independent, 01/11/1877, Issue 5876 p. 5.

Welcome to the blog of the Legacies of British Slave-ownership project.

We'll be writing about individual case studies, making comments on sources and the research process and anything else which has attracted our interest. Different members of the research project will take it in turns to post about the work they have been doing.

Guest blogs: the Legacies of British Slave-ownership Project team is not responsible for the opinions of guest bloggers nor for the accuracy of any information contained in their blogs.

The main project site can be found at the UCL-LBS website.